*** No racing scheduled ***
Admission: $10 per person • 12 and under FREE with adult
* Directors & Volunteers Meetings: Fourth Tuesday of Every Month * Quail’s Nest Art Centre in Oliver * 5840 Airport Street *
Wanna Race? Register to drive – anyone can join! 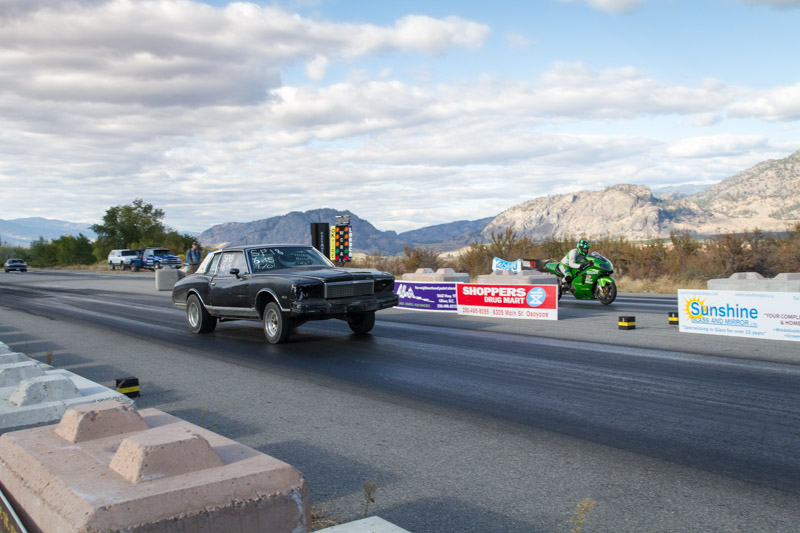 Photo by Dan Hodson. Father/son drag racing duo Ken and Warren Brown (Oliver, BC) line up for a grudge match at Richter Pass Motorplex last Sunday in Osoyoos, BC. Neither of the Brown men snagged a trophy last weekend, but when fun runs in your blood, the weekend is never a loss.

Drag Racing Winds up in Osoyoos

The last drag race of the 2017 season is now in the history books for Wine Country Racing Association (WCRA).

The troop of volunteers and sponsors worked their magic yet again at the Osoyoos airport. This past Sunday WCRA had 94 drivers registered and ready to show off their stuff to well over 400 fans. This is how people like to spend Thanksgiving weekend at Richter Pass Motorplex.

The final rounds of the day played out as follows:

Jim Behnke (Mission, BC) drove his 1971 Plymouth Scamp to victory over Blair Ogilvy (Osoyoos, BC) and his Chevrolet pick-up.

Jim Piggot (Salmon Arm, BC) took the trophy in his 1971 Plymouth Duster away from Mark Sherriff (Summerland, BC) and his Deputy Diesel 2005 Chevrolet pick-up.

Bucky (Michael) Stewart (Langley, BC) zipped the trophy home in his 1967 Chevy II. Stewart drove past Kayle Shaw (Penticton, BC) in his 1973 dragster.

This weekend’s winner of reaction time was only .001 of a second off of a perfect launch. Congrats to Dean Russell (Penticton, BC) in his 1967 Mercury Comet Caliente.

Ron Tasker Memorial/Sportsman of the year

This season WCRA elected TWO people to win the Ron Tasker Memorial Trophy. James Lutz (Enderby, BC) with his 1966 Ford Fairlaine has to share with twin brother Jason Lutz (Enderby, BC) and his 1966 Ford Fairlaine. Something tells me these two may be accustomed to sharing things in life. Both gentlemen exhibit good sportsmanship, a sincere willingness to help around the track, and promote the WCRA enthusiastically to their friends, relatives and anyone else in Enderby who is willing to listen. Thanks Lutz Boys, from all your friends at WCRA!

The track has been all packed up for the winter, but rest easy knowing that your favourite teams and drivers are already tearing their vehicles down to make improvements.

Visit www.winecountryracing.ca for updates throughout the winter.