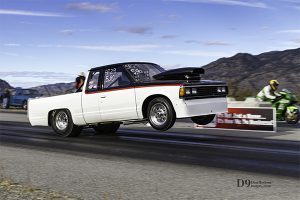 The Wine Country Racing Association (WCRA) had their final drag racing event of the 2016 season yesterday at Richter Pass Motorplex. It was a time for one last kick at the can before all of the vehicles are tucked away, and Old Man Winter makes an appearance in the South Okanagan Valley.

What a kick it was. More than 60 drivers and a nice showing of fans turned out on the Thanksgiving weekend to have some fun with friends and family.

Track regular, Phil Walter and his 1986 Nissan truck made his way down the valley with a nice surprise under his hood for everyone. The black and white truck delighted everyone in attendance with its new high-wheeled launches from the starting line.

To say that the Super Pro winner had daylight under his tires was an understatement of a lifetime. One fan in the grandstands could be heard announcing, “that’s high enough to walk under!”

When Walter was asked if the truck slams down after the wheelie he commented,  “No! It’s quite gentle going back down! You’d be surprised!”

Paul Fode (1970 Plymouth Cuda) from Kelowna, BC fell to Gary Conto (1967 Camaro). Conto brought his ride from Westbank, BC to take home the prize.

Wheel-standing Phil Walter (1986 Nissan truck) from Peachland, BC zipped away with the Super Pro trophy, besting Levi Weiberg from Grand Forks, BC (1981 Buick ).

Phil Walter (1986 Nissan truck) was on his game this weekend. An absolutely PERFECT reaction time of .500 is just one more bit of proof.

Brad Quwek from Bruderheim, AB (1973 Astra) was awarded the Sportsman of the Year Trophy. Brad is a gentleman that is always ready to lend a hand or offer up strong competition. His kind manner and easy smile are a pleasure for everyone that meets him.

A big thank you goes out to the club, racers, volunteers, sponsors and fans for a fantastic racing season. Ending on a high makes it harder to wait until spring for the next event.