Here are the race results from 2022 so far! The first race, on May 14 was rained out, and races were cancelled. The second set of races on June 5 were also rained out, as was the Test & Tune the day prior.

It rained all morning on Sunday, June 19th – Father’s day – but we persevered, waited it out & dried off the track in order to at least run time trials starting at 1:00 pm.

Some driver’s set up their own challenge with the following results:

This year our insurance provider Stoneridge insurance has advised that ALL event waivers for participants for all race events they insure must be submitted online. Please create your waiver BEFORE you come to the track, and bring it with you to cut down on registration wait time.

You can sign and submit these driver waivers one of two ways – both of these methods are outlined on our Racer Info Page.

We appreciate your patience and cooperation during this transition time!

Due to COVID-19 precautions, WCRA has made the following changes:

CANCELLED: The work party for April 18, 2020 has been cancelled.
We will notify when it is rescheduled.

CANCELLED: The race weekend April 25-26 will be cancelled.
Will notify about June 6-7 race weekend, which will be dependent on conditions.

More details about the reasons behind these adjustments can be found here(#) and here(#). 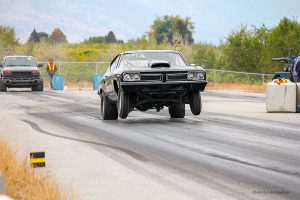 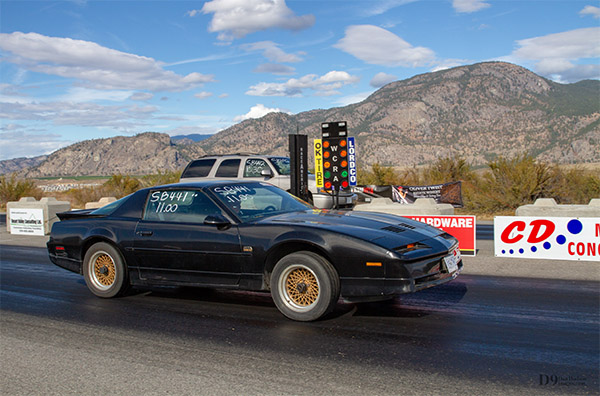 Photo Credit: Dan Hodson, Oliver, BC
Cutline: Two next-generation Cachola drag racers face off at the starting lights last weekend at Richter Pass Motorplex. Dustin Cachola (Trans Am) at 14 years old and Susannah Cachola (Yukon) 17 years old are perfect examples of why WCRA exists. A safe, legal venue to compete has given both of these youngsters motivation to bring up their academic performance.

Last Sunday, September 23 was the 9th time around for the Wine Country Racing Association (WCRA) to play host with their annual Car Club Challenge. This Okanagan Valley-wide rumble drags the racers and fans in for a day packed full of drag racing in British Columbia’s pocket desert.

This year a newly entered gang of gear heads, called the Detonators, rumbled and roared their way to the trophy presentation.

Mason McCune (1989 Ford Mustang) was the Detonator’s champion, and proudly hauled the trophy back to Enderby. It was no easy task. Rick Hill didn’t come from Summerland, BC in his 1958 Ford pick-up to mess around. He took the Okanagan Rodtiques right up to the final round. McCune may have looked fresh-faced to the fans, and it was for good reason. This young man isn’t yet 21 years old, and is a new-comer to the sport. This marked his second drag racing day. McCune is yet to lose a race. I can only imagine the fierce competition that the 10th Challenge holds in store.

McCune races with his Dad, James, and his uncle, Jason, who are also part of the Detonators Car Club. Drag racing is definitely a family affair down at Richter Pass Motorplex.

A 2nd trophy is awarded to the Club winner in the “Fast 8” competition. The name pretty much tells you how this competition works. Fastest 8 cars, battling it out to find the one speedy champion. This year the Rodtiques’ own Tom Groot (Summerland, BC) flew past the competition in his 1967 Firebird. No doubt Kelowna Kustom’s Rand LePage will be back next year with his 1956 GMC pick-up, determined and ready to upset the story.

Don’t be mistaken into thinking that the Car Club Challenge was the only thing shaking up the track last weekend. A group of racers from Kelowna, known as the Kelowna Outlaws, made an appearance. This club rolls up in their cars…no trailers here. These super fast street legal vehicles are required to make passes at drag tracks throughout the province and had a minimum number of passes they had to make. Their vehicles then had to get them all the way back to the BBQ in Kelowna, in order for them to get credit in their club’s standings and remain in the competition. It’s not too much to say that these were some impressive rides.

Let us not forget all the “regular ol’” drag racing that went down. WCRA can now boast that this last weekend was a record breaker in car count. 123 registered drivers signed their names and pushed their cars to the limit, all in the name of a good time.

Jim Behnke (Mission, BC) brought his 1973 Plymouth Scamp a long way to beat out hometown guy Blake Ogilvy (Osoyoos, BC). Ogilvy raced the track in his 1981 Chevy pick-up this weekend.

Chris Kroening (West Kelowna, BC) took his 1969 Chevy Beaumont to trophy lane by beating Robin Redding (Merrit, BC) and his 1927 model T.

Kayle Shaw (Penticton, BC) was ripping it up in the Boult Automotive propane powered, 1973 Vega. Shaw outdid Brad Baxendale (Osoyoos, BC) and his 1969 Chevy Beaumont.

Riley Ward (Kelowna, BC) moved his 2000 Dodge Dakota off the line for the best reaction time this weekend with a super fast

WCRA has one event left this season. 2018 winds up on Thanksgiving weekend, October 7. Nothing pairs with turkey quite like drag racing.

Gates will open in two weeks at 9 a.m. $10 gate fee applies to all over 12 (kids must be accompanied by an adult.). Concessions are available on site.

For more information go to WWW.winecountryracing.ca 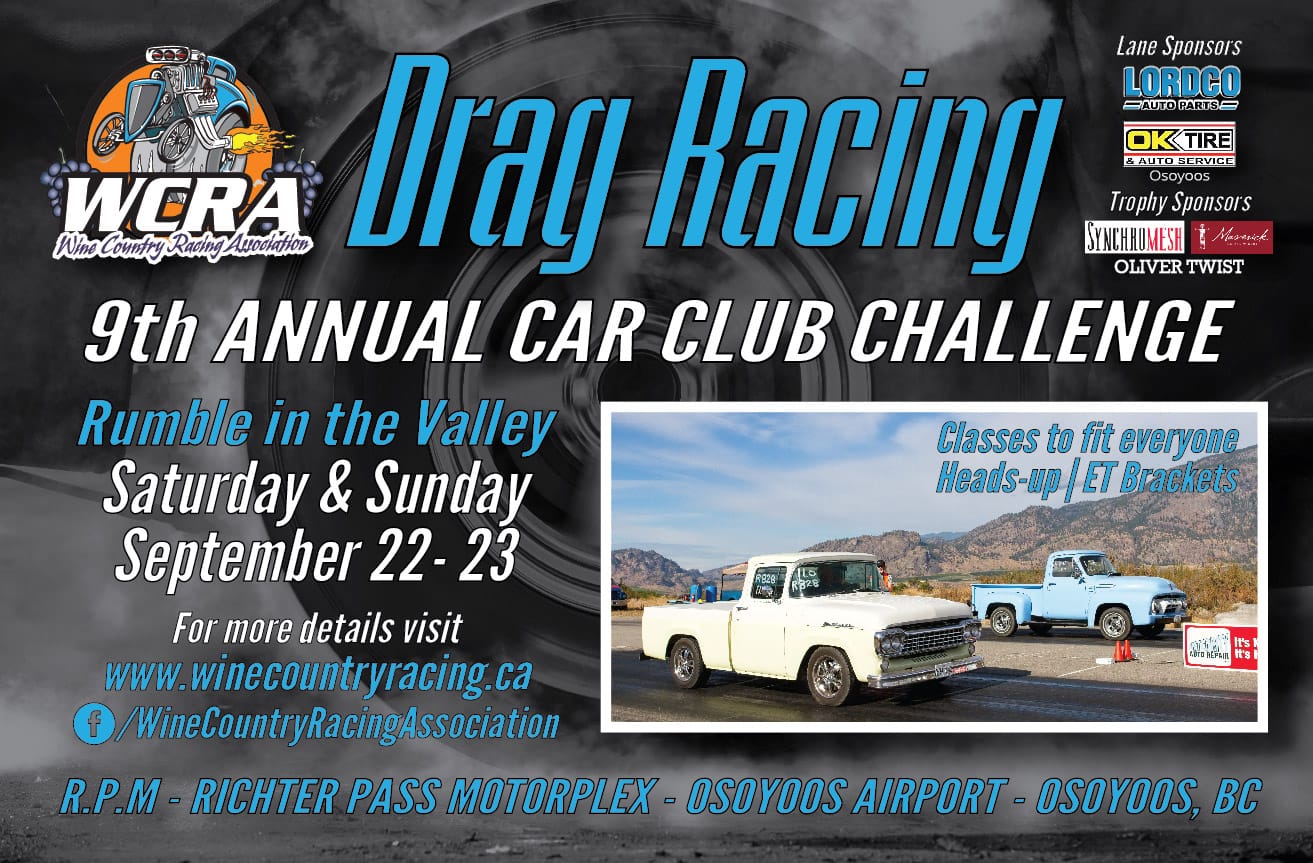 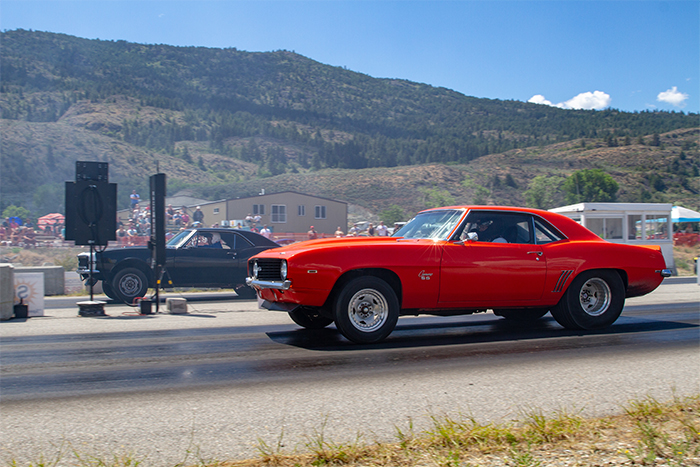 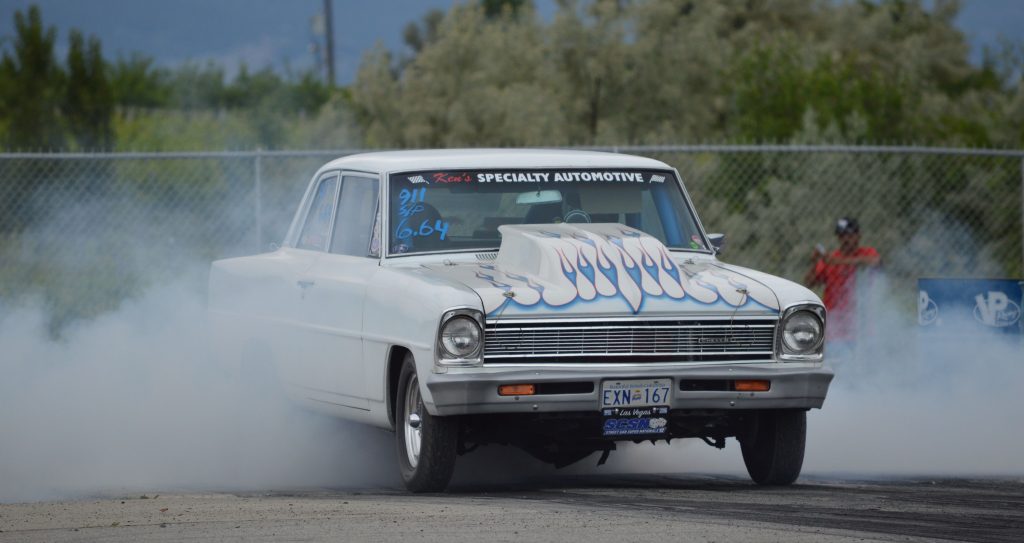 A weekend filled with all sorts of car shows and events to entertain the automotive enthusiast culminated with the following drivers gracing the winners’ circle.

Mason McCune made his car club, The Detonators, proud by dragging the trophy home to Enderby. McCune drives a 1989 Ford Mustang.

Dean Martin, currently living in Castlegar, has the bragging rights this week by topping the Pro Bracket with his 1967 Camaro.

Michael (Bucky) Stewart of Langley adds yet another piece of drag racing jewelry to his bragging wall by out-racing the others in his 1967 Chevy II.

The Americans take a trophy back across the border with them this go around. Bob Henrie (Conconully, WA) bested the competition in the bike/sled bracket on his 2009 Polaris IQR.

Father’s Day Sunday is the next event at Richter Pass Motorplex. Treat Dad to a special day at the track.

Gates open at 9 a.m. on race day. Newcomers are welcome and encouraged to show up early for registration and technical inspection. Visit www.winecountryracing.ca for more information. 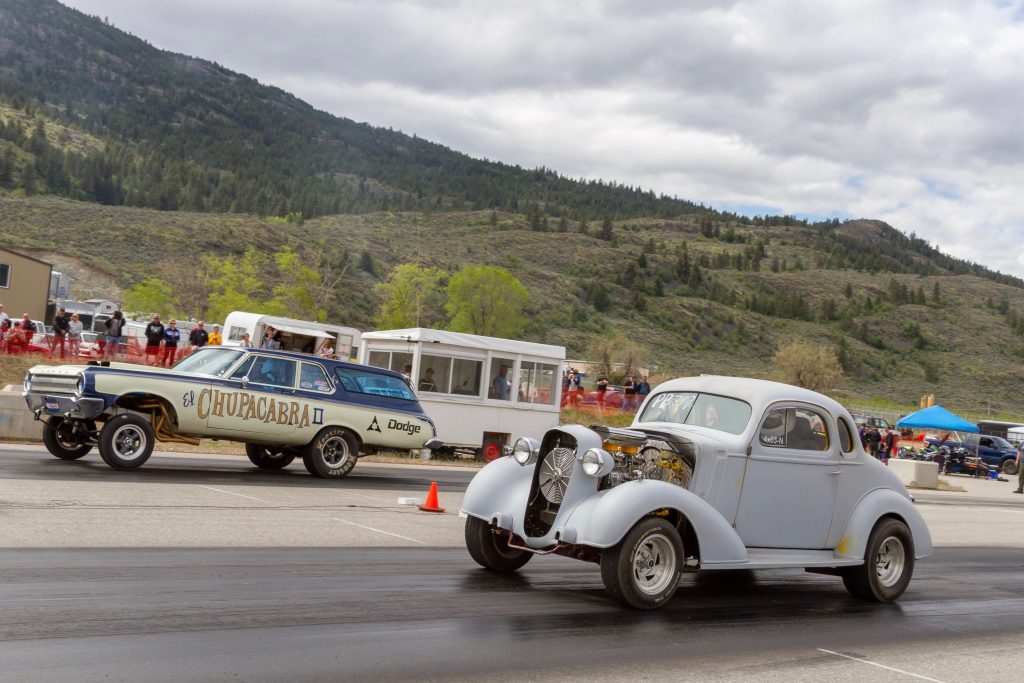 The ever-popular Chupa Cabra II (driven by Polara Pat McInnis of Nelson, BC) and Frank Egli’s 1935 Chevy coupe (Salmon Arm, BC) launch hard from the starting line at WCRA drag race #1-Osoyoos, BC.

There are those times in life. You know them, THOSE times. All you need is a little escape from reality. Whether your work is keeping your nose to the grindstone, flooding is getting you down, or your life needs a wee pick-me-up in general, there is someplace you can go. The volunteers of Wine Country Racing Association (WCRA) are getting Richter Pass Motorplex geared-up, out-fitted and ready to host the second race of the 2018 drag racing season in the South Okanagan Valley.

The speed junkies from near and far will gather at the Osoyoos,BC airport on Sunday, June 3 to show off their hot cars. Let’s see what a little friendly competition can do to your average, everyday house wife or your neighbourhood mechanic when race day rolls around. Centered around good fun and great times, the drag racers are sure to put on a show to please the crowd all day long.

Spectators can enjoy the scrumptious eats at the concession stand while watching side by side 1/8 mile drag racing from 11 a.m. with elimination rounds starting at 1 p.m.

Gates open at 9 a.m., but not only for spectators. If you’ve ever wondered what it’s like… If you’ve thought your car is fast… If you want to have some drag racing fun in the desert you are welcome to come race. New racers are encouraged to come early to register, pass their car through technical inspection and have a chance to chat and get to know the place.

Get June started off on the right foot, with the right foot pressing the accelerator straight down, hard to the metal. Ten bucks gets you through the front gate. Remember, youngsters 12 and under are free, with an adult.

Enderby’s Jordan Almaas lines his 1969 Dodge Dart up against Robin Reding and his 1927 Model T for the Pro Bracket final at last weekend’s drag race.

Glenn Taylor (Osoyoos, BC) was able to climb his way to the top of a mountain of street cars Sunday. Consistency in his 1990 Ford Mustang pays off.

Robin Reding (Merrit, BC) drove his 1927 Model T to victory in the Pro Bracket.

Mike “Bucky” Stewart (Langley, BC) took his 1967 Chevy 2 to the victory lane in the Super Pro division.

Lorne Stavinga (Grand Forks, BC) zipped past the competition to take home the Bike/Sled trophy.

Go to www.winecountryracing.ca for more information, or find us on Facebook to stay updated.

Two June races are scheduled to finish up the spring segment of drags in the South Okanagan Valley.